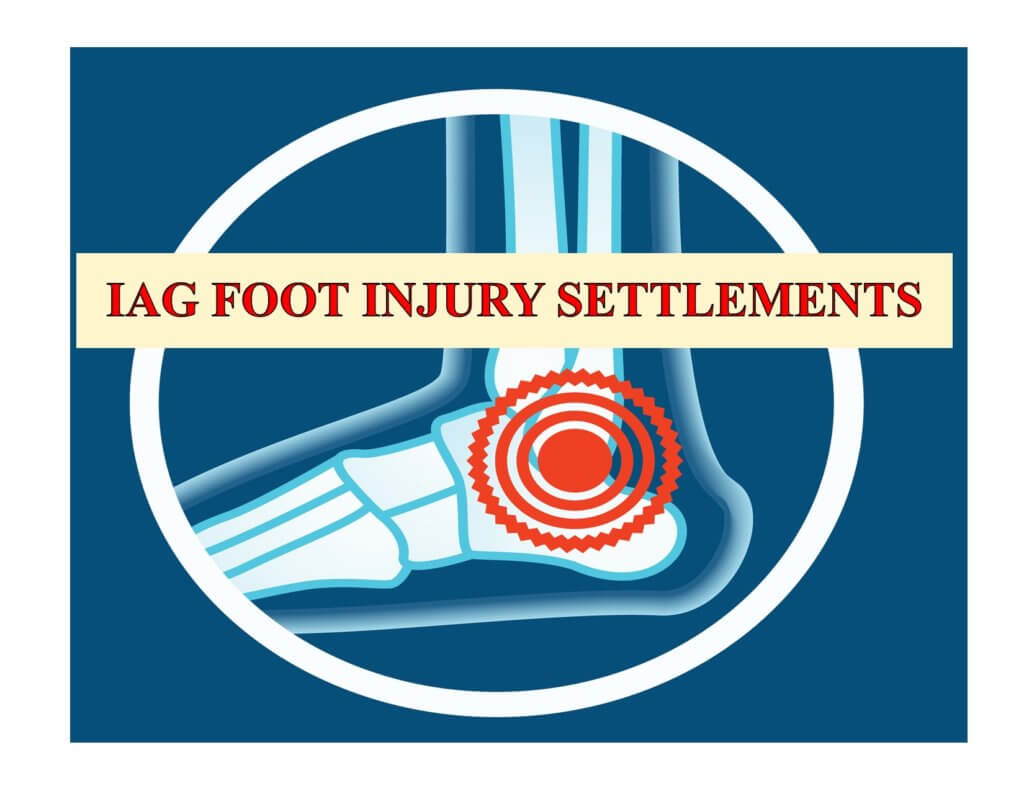 Foot injuries can cause serious debilitations in your life because most of your daily activities require you to stand, walk or get up and down.  This plays a role in how much money you can get from such injuries.

In this article you will learn about:

Read on to learn more about how much a broken foot is worth and what steps you should be taking next to ensure you get the largest settlement possible.

7 – Get Help With Your Foot Injury Lawsuit Settlement

In an accident your body will naturally prepare by tensing up and preparing for impact. Unfortunately, this often puts stress on your foot and a large amount of impact as well.

The foot is complex and made up of 26 bones which along with the surrounding muscles and ligaments can take the full pressure of any impact.

Damage to any of these bones can easily cause long-term health problems as well as long-term mobility issues. In extreme cases, there can also be the need for amputation of the foot as well. 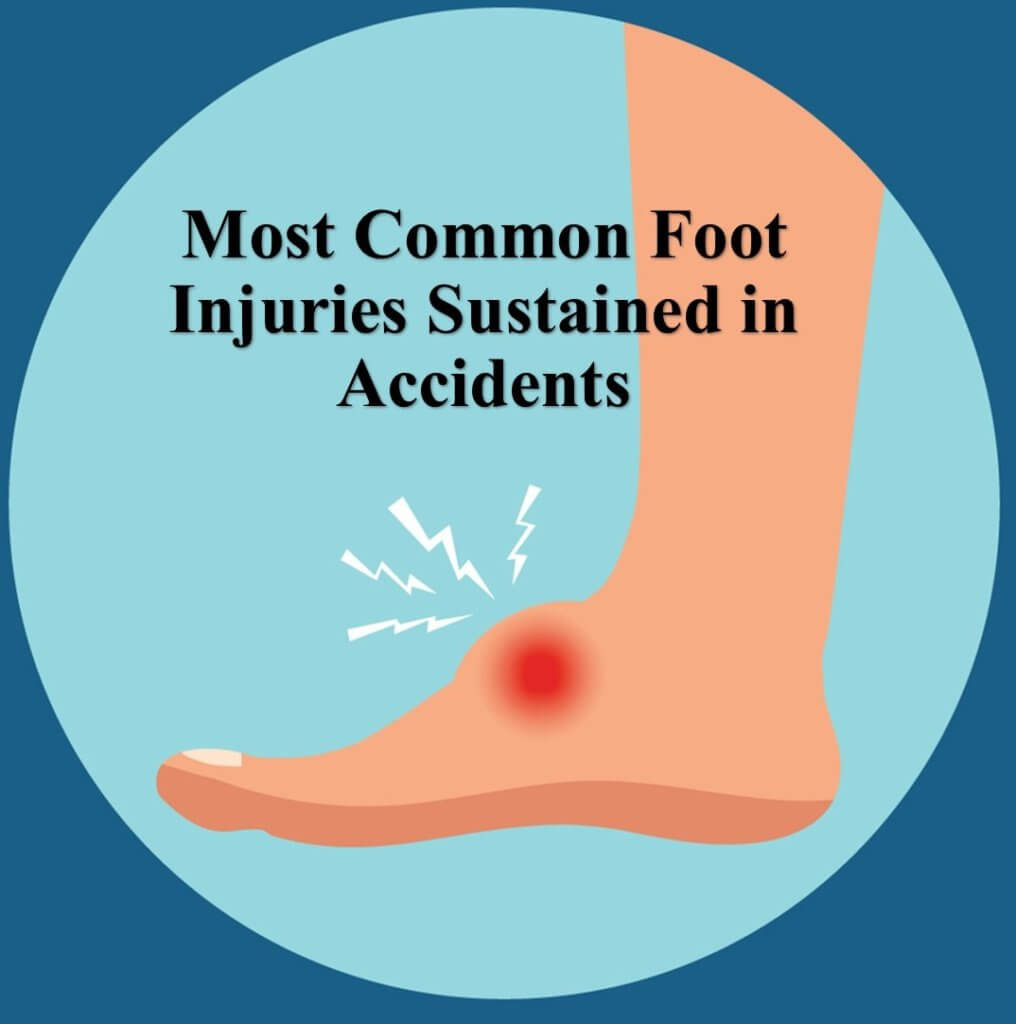 Average settlement for a broken foot depends heavily on which bone in your foot has been damaged and what type of injury you suffer from.

While there are many possible injuries that your foot can sustain during an accident, some of the more common ones are:

The injury causes bleeding and swelling and becomes very painful and debilitating. A compartment syndrome injury will not heal on its own and requires medical attention.

The middle of the foot is particularly sensitive to injury and damage to it because of sharp impacts, blows or any form of trauma, can lead to short-term concerns like pain and immobility, as well as long-term ones like arthritis.

This is also known as a Lisfranc injury and can take months on average to recover from, often requiring surgery.

The heel bone, also known as the calcaneus, is often damaged in an accident involving the foot. This injury often requires surgery and left untreated can lead to chronic pain and arthritis.

Surgery and recovery for the heelbone is also linked to higher broken foot compensation values because a broken heel means inability to walk for a long period both before and even after treatment.

A broken foot car accident settlement is often tied to what kind of injury you have sustained and what level of treatment you require. 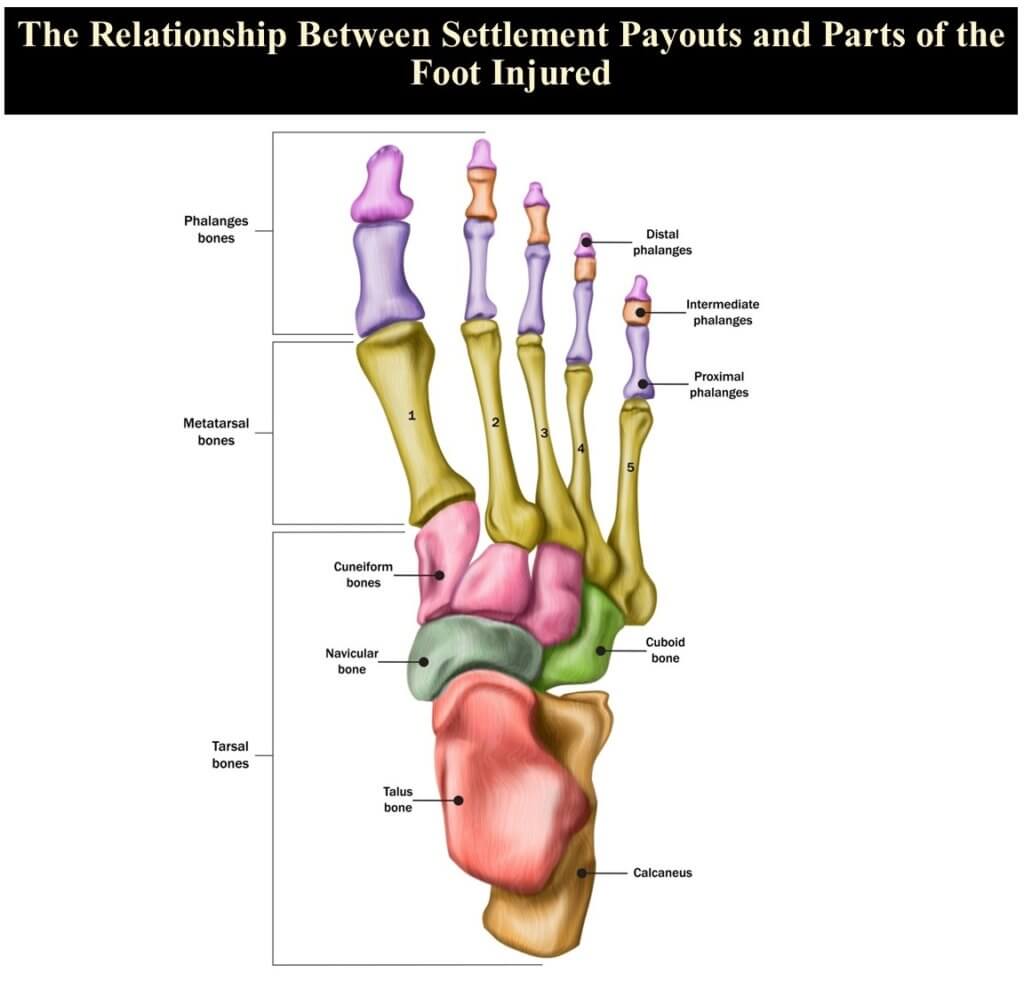 Your broken foot compensation for example will be higher if you requires surgery or if you need surgery to specific bones like the cuneiform bones.

Some of the bones in the foot will require longer surgery times and also will require surgery in order to return to normalcy.

The potential for long-term ailments and chronic pain coming from such injuries will have an impact on your broken foot car accident settlement. Therefore, surgery or long-term care can increase your foot injury compensation payouts.

These higher payouts are also linked to the fact that often, an injury to the foot results in secondary complications like infections and abnormal recovery and bone healing which can lead to the need for further surgeries down the road.

The more disruptive an injury is to your life, the higher the average settlement for a broken foot can be.

How Much is a Broken Foot Worth?

As noted previously, a broken foot settlement is worth more when there are specific conditions in place. This includes which bone was broken or damaged, whether or not there was additional injury to the surrounding tissue, ligaments, nerves, etc. and whether or not surgery was needed.

Your fractured foot settlement will depend on many factors, but common ones are:

♦   Which bone was damaged and to what extent?

♦   How long were you forced to be off your feet?

♦   Did you lose wages in the process?

♦   Your pain and suffering

You may be wondering how much your case may be worth? This question has many parts to it and some variables can help increase your settlement value.

While there are many potential injuries to the foot, some are less common and also pay more in settlements.

The most common injury to the foot is a break but it is important to remember that not all breaks are the same, and some, like displaced breaks of the foot can often be worth more.

This means that it is important to get medical treatment as soon as possible to ensure that you are identifying and getting proper treatment and documentation of your specific injury.

Increased pain and suffering payments are also often tied into how debilitating your injury was.

VERDICT: $6,167.00. A young woman was on her way to a class when her car was hit. The impact caused the plaintiff’s car to spin into oncoming traffic and hit an embankment before rolling over two times and finally falling on the right side. The plaintiff claimed that the defendant was negligent in their maneuvering and how they hit their car. Plaintiff was forced to undergo multiple tests including x-rays and cat scans. Plaintiff’s injuries included lacerations and trauma to multiple parts of the body including her right foot.

VERDICT: $100,273.00.  Plaintiff was stopped at an intersection when she was struck by a negligent driver on the driver’s side of her car. This led to multiple injuries to the foot and the toes including sprains and strains, and fractures which required medical care and testing. The injuries that were sustained in the accident were not all able to be treated fully and some became a chronic permanent situation leading to lifelong pain.

VERDICT: $32,500.00.  A driver was left with damage to the right foot when their car was struck by another motorist who was not insured. The accident impact led to permanent damage, including a 20% permanent disability in the plaintiff’s right foot. The case was hard fought as the defendant contended that the injuries were not serious and that they were previous injuries that the plaintiff was only claiming was caused by the collision.

The compensation amount you get for your broken foot injury will depend on which injury you sustained as well as how long it takes you to recover.

Other factors like the level and extent of treatment you require will also have impact on your final settlement amount as pain and suffering values are heavily tied into variables like how long you were made immobile, and if you need surgery.

Can a foot injury cause long-term damage?

Yes, a foot injury can become a long-term and chronic problem. This comes from the potential for infections, the high chance that the bones can deform during recovery and the possibility that more than one surgery will be needed to attempt to heal affected part of the foot.

Does getting surgery increase my chances of higher broken foot compensation?

Yes, getting surgery for your broken bone injury or any foot injury does increase the compensation you will likely receive. The need for surgery suggests highly that your injury was serious and could not heal on its own and required more intrusive assistance.

Is it possible to develop arthritis from a foot injury?

Yes, unfortunately, arthritis can develop from an injury to the foot. Damage to any part of the foot can lead to long-term consequences and one of these has been shown to be the development of arthritis which has life-long consequences and debilitations.

I can still walk on my foot, does this mean I don’t have a foot injury?

No, you may have a serious foot injury and only feel some pain, but not enough to take you off your feet completely. This does not mean you do not have a serious injury and you actually may be making your injury worse by failing to get treatment while walking on your foot.

How long will my foot injury take to heal?

Your foot injury can take as few as a 2-3 weeks to heal or it can take as long as 3-4 months to heal. Some injuries in fact never fully heal and can take years to recover from or become chronic conditions that you must deal with forever.

Contacting our Los Angeles personal injury lawyers at IAG can help make the difference between a low offer that barely covers your losses and a foot injury compensation payout that you deserve.  Even if you are not in Los Angeles, we can help you.

Foot injury cases are often difficult because insurance companies will downplay their severity. These surgeries however are not at all benign and can cause serious pain and suffering as well as financial loss.

Call, email, or message us using the contact form below, 24/7, for a FREE phone call with our legal team.

Before calling, you are invited to learn more about broken bone settlements generally, or how personal injury claims are really valued.