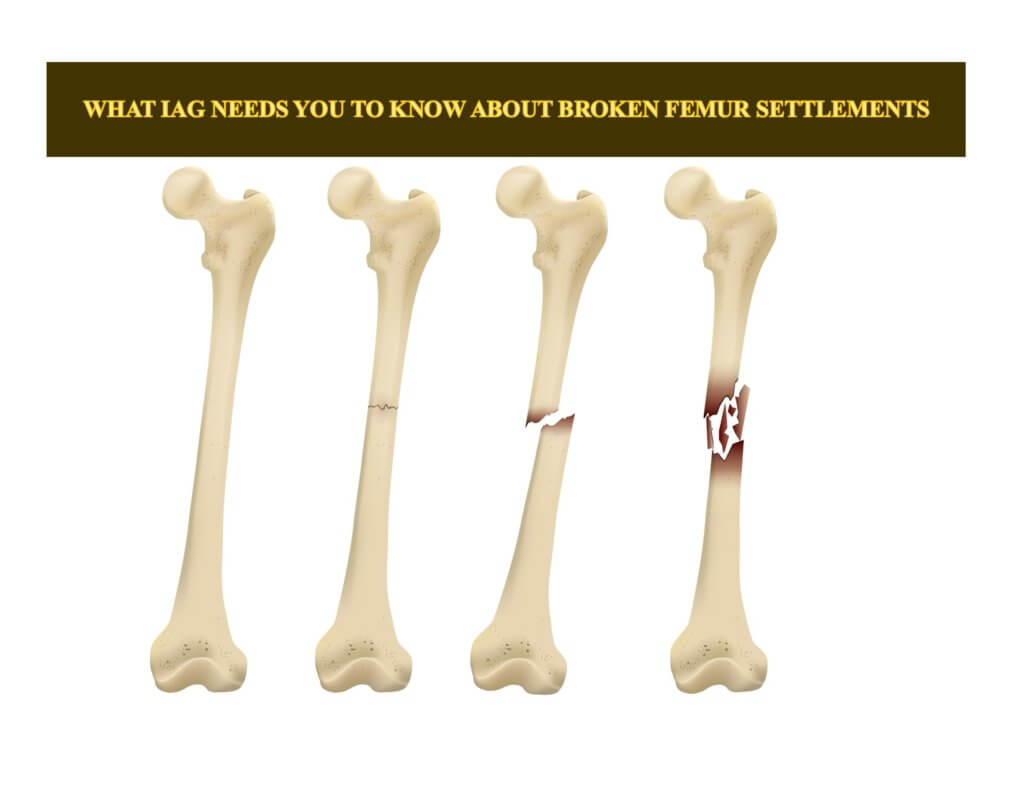 There are well known variables (at least, in the lawyer world they’re well known) that can make the average settlement for a broken femur much lower or higher.

In this article you will discover

♦   What femur damage and injuries are

♦   The recovery process for a broken femur

♦   How your recovery and treatment affects your broken femur settlement

♦   Variables that can lower your average settlement for a broken femur

♦   How we can help you maximize your settlement

If you have questions about your broken femur settlement value and what may lead to it being lowered read more below.

4 – What Increases Your Broken Femur Settlement

7 – Get Help With Your Broken Femur Settlement 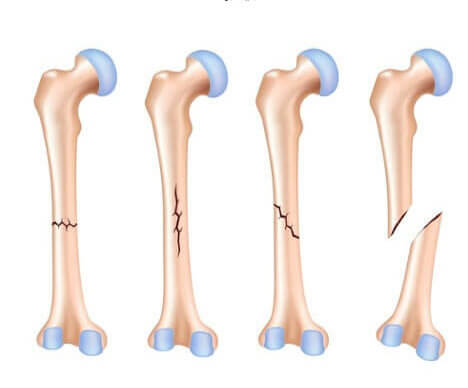 The femur bone runs from the hip down to the knee. This bone is very strong and generally, only severe impacts can cause there to be a fracture.

Not all femur breaks are the same. There are generally two kinds of breaks in your femur.

The first is a displaced one, where the two parts of the femur that are broken no longer align.  The second is where the bone is broken but the broken pieces are still aligned with each other.

Femur breaks can generally fall into one of the following categories:

The femur break that is displaced can also lead to either broken skin which is known as an open fracture, or one that is fully internal, which is a closed fracture.

Breaks that are both not displaced and open fractures have a much higher chance of additional injuries to muscles, nerves and tendons and a higher risk for infections.

The type of break you have is one of the major factors in the value of a broken femur car accident settlement case.

The recovery time for a non-displaced break that has no open skin segments tends to recover sooner and needs long periods of rest so that the bone can begin to heal.

This only works for breaks that are no serious. In most broken femur cases, displaced or not, there will be the need for some level of surgery. For the displaced breaks in the femur, generally, ORIF surgery is used to go in and realign the bone. Depending on how severe the break is, there can be the use of pins to hold the bone together and give it a chance to heal.

A broken femur with this level of break will require months of intensive care and rehabilitation. During this period of time, you will also not be able to put weight on your affected leg, which again can impact the average settlement for a broken femur.

Should there also be broken skin or an open injury to the femur, this can mean the chance for infection and that the surrounding tissue and nerves have also been damaged.

If this is your case, you can expect even longer periods of treatment and more medical attention and care to help your pain and recovery.

♦   Ending up with an altered gate

♦   Back pain from the lack of use of one leg

♦   The break being in the central shaft part of the bone

Read below to read more about average settlements for broken femurs and their variables.

Your broken femur settlement value can be increased if you have a displaced open fracture or you require multiple surgeries or you have long-term damage.

All variables will not help you though. Advanced age, presence of osteoporosis in your medical history and any other conditions that could have caused your bones to already be weak, can ensure that your case is lowered in value.

These are not the only ways that your value cane be lowered. Some other hindrances to your settlement value for a broken femur being maximized are:

♦   Prior injuries to the bones in your legs

♦   Whether or not there is insurance with the parties involved

A broken femur car accident settlement case therefore can average within a large range, and it depends on the many variables that your specific case has.

Just because you have a prior condition that affects your bone strength, like osteoporosis, this does not mean you have to get a lower value in your case.

There are well over 50 different variables that can affect your case value and the only way to know how these affect you in your state, will be to have a consultation with a professional to get help.

In some states, the average tends to be around $100,000 while a neighboring state has averages as high as $250,000. These averages in each state will also impact your potential settlement.  A lawyer can help you determine the value range for your case and jurisdiction.

What Increases Your Broken Femur Settlement

How you can increase your settlement value will be partially related to the specifics of your case, and in other cases, what actions you take after your accident.

In the case of a displaced, and particularly an open displaced injury, taking photos immediately can be key to your settlement value being increased.

The speed with which you get medical care will also factor into your settlement value. Delaying treatment will be seen as your pain not being severe enough to warrant immediate medical care.

The combination of photos before you even get treatment, and the swiftness with which you get treatment, will add highly to your final settlement value.

Keep the following in mind when you are thinking about how to increase your average settlement for a broken femur:

♦   Take Photos immediately, especially if you have an open fracture

♦   Seek medical help as soon as possible after your injury

♦   Document all medical treatments you are receiving and what the short and long-term consequences are of your treatment.

SAMPLE VERDICT (Texas): $167,000.  Plaintiff in this case was on a motorcycle when he collided with a vehicle that was going through an intersection in an unsafe manner. The result of the accident was a fractured femur bone which required there to be surgery and a long recovery period. There was a policy limit of $60,000 but the plaintiff additionally sued for damages under the uninsured motorist coverage and was awarded the additional value brining the case to close to $200,000 total.

SAMPLE VERDICT (Pennsylvania ): $85,000.  In Pennsylvania a plaintiff suffered a fractured femur as well as other injuries to the leg after their car was hit when they were stopped at an intersection at a ref light. The nature of the injuries was severe and led to the need for hospitalization as well as multiple surgeries to address the breaks. There was also future pain and suffering value added as the plaintiff was told that future surgeries would be needed later on and that they may experience pain from this into the future.

SAMPLE VERDICT (Florida): $75,500.  A 17-year old plaintiff suffered a fractured femur as well as a fractured toe and other leg injuries when the car that she was in an accident on a public roadway. The accident took place after the driver lost control of the vehicle which caused the car to overturn several times and led to the plaintiff to be ejected from the vehicle. Plaintiff required surgery for her injuries and in court came to an agreement with the insurance and defendants for an amount to cover for her injuries and pain and suffering.

SAMPLE VERDICT (Alabama): $200,000.  During a head on collision involving the plaintiff and another vehicle on a highway in Alabama, the plaintiff was injured severely with multiple injuries to the legs. This included an open fracture to the femur which requires a long-term stay in the hospital as well as multiple surgeries to help align and allow for the femur to heal.

SAMPLE VERDICT (Maryland): $40,000.  A minor female suffered a fractured femur when the vehicle that she was in was an accident with an uninsured vehicle. The accident took place when the uninsured vehicle pulled out in front of the plaintiff causing their car to swerve to avoid collision. This led to the vehicle hitting two power poles on the highway after the other vehicle acted in an unsafe manner. The defendant stated that the plaintiff’s were contributorily negligent in the case and that the injuries suffered were therefore only partially the responsibility of the defendant.

What are the average broken femur settlement values?

The average settlement values for a broken femur settlement can range a great deal and do vary from state to state.

Nationwide there does seem to be an overall mean average for broken femur cases. This value is about $171,000 total.

The biggest impacts on a broken femur settlement value tends to be the severity of the injury, i.e. was it a displaced break or a non-displaced break, and whether or not there was any open or broken skin in the injury.

Are there elements that can reduce my settlement value?

Yes, there are elements that can reduce your settlement value as well. For example, if you have prior injuries that have weakened your femur bone, or you have medical conditions like osteoporosis, there can be a lowering of your overall case value.

Many variables can affect your broken femur settlement which can be confusing to navigate. The best way to ensure that you are getting the value you deserve is to make sure you have help from the start of your process.

Our Los Angeles based lawyers can help with that.  Contact us at IAG for a free consultation any time so that we can help set you in the right direction and make sure your settlement value is maximized.

You can reach us by phone, email, or message us using the contact form at the bottom of this page.