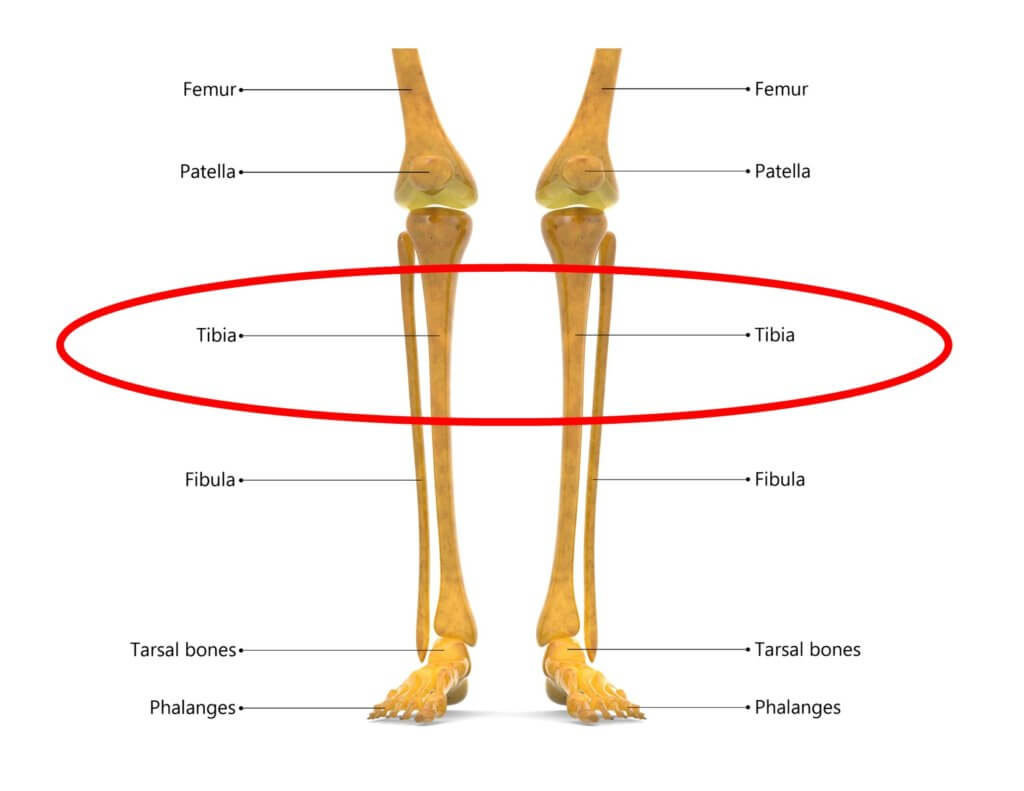 A tibial plateau fracture is not just any break, instead, it is one that can cause permanent mobility impairments.

Despite this, insurance companies try to downplay this seriousness so that they can give you a smaller tibial plateau fracture settlement.

In this article we will go over:

♦   What are tibial plateau injuries?

♦   How you can maximize your compensation payout

Read below to see why no matter what the insurance companies say, your tibial plateau is a serious injury that entitles you to serious compensation.

4 – How Much Is Your Tibial Fracture worth?

7 – Get Help With Your Tibial Plateau Injury Claims

The tibial bone is also known as the long shinbone that connects on the bottom to your ankles and feet and at the top to your knee and femur bone region.

The tibial plateau is the upper part of this shin bone and is responsible for the stability and the movement of your knee.

When this area of the leg is injured it is debilitating because fractures to this region mean an inability to use or move your knees in a normal way, rendering your knee and leg unusable.

A common cause of a tibial plateau fractures is blunt force trauma, the kind you can sustain in an accident.

A tibial plateau injury should to be diagnosed by a doctor, but signs that you may have this injury can be:

♦   Swelling of the affected knee and surrounding area of the leg

♦   Physical deformities in the knee that has been affected

Any of these symptoms are signs that you may have a tibial plateau injury and will need to get medical help and will likely also face long-term recovery times. 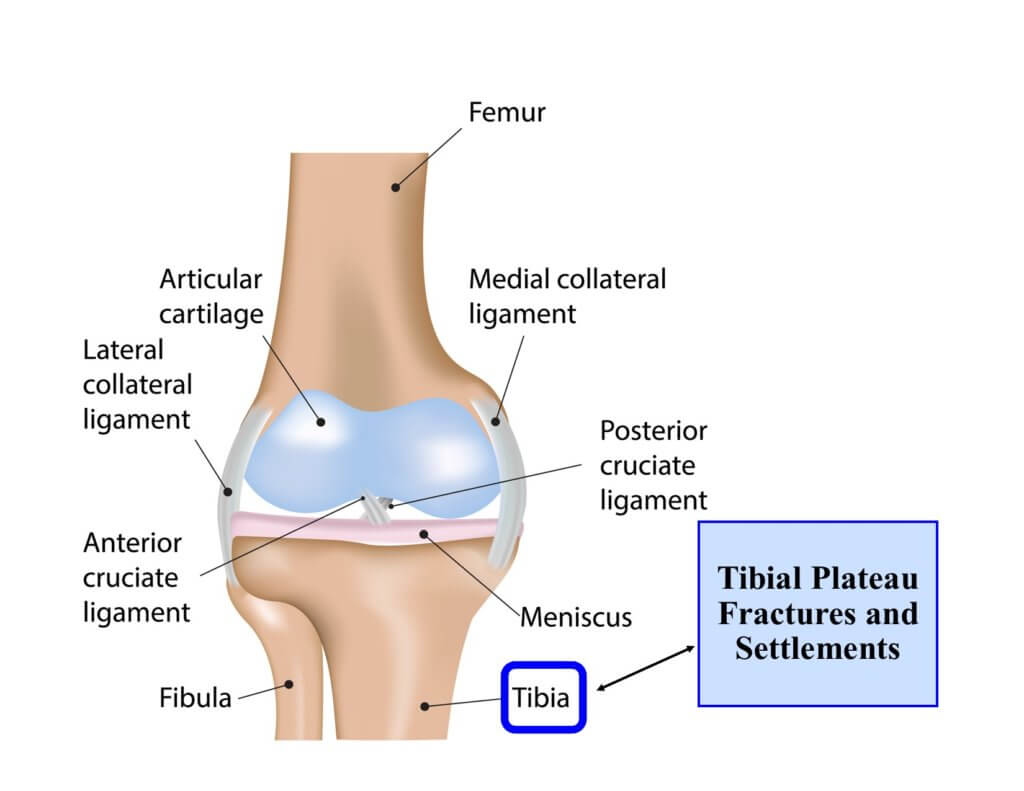 How long it takes to recover will directly play into your tibial plateau fracture compensation amount.

The length of time it generally takes to recover from this injury is about 4-6 months to completely heal. More serious fractures can take even longer and sometimes lead to the need for serious medical intervention.

A tibial fracture more than anything needs time to heal, which will mean staying off your feet for months. For those with active lifestyles and jobs, this can mean a very diminished life.

You will likely have to wear a brace on your affected leg and also use crutches to get around.

This phase where you are severely limited can last from a few weeks to a few months and you will not be able to place any weight on the leg. Even daily activities in this period may have to be assisted with mobility devices to ensure proper healing.

Your recovery process will depend on which kind of tibial plateau fracture you have sustained. If the bone is not displaced this means that the tibia has sustained a break but the bones are still intact with each other.

This kind of tibial plateau injury is not as serious as it can usually recover in a shorter period of time.

Tibial plateau fracture settlement values for these injuries tends to be less but can still be substantial because of the need for months of physical therapy that is frequently needed.

When the tibial plateau fracture is a displaced one, this means that the bones are out of place and need to be put back into place. These injuries more often than not need surgery as well as the insertion of screws and the wearing of braces for long periods of time in order to ensure proper recovery.

Tibial plateau fracture compensation values in displaced injuries will usually result in higher payouts because of the damage to the surrounding area of the knee and the lack of mobility that comes with the recovery period.

What will affect your tibial plateau fracture settlement?

While each case is different, some common variables will make a major difference in the final settlement value.  Some of the most common ones you should know about are:

♦   Did your surgery require the insertion of screws and pins?

♦   Was your injury bad enough to require an immediate visit to the ER?

♦   Were you given x-Rays and MRIs that showed your injury clearly?

♦   Did you miss out on work and your normal daily routines?

♦   Did you lose quality of life

Any combination of these variables will ensure that your tibial plateau fracture compensation value is higher.  The key is to know how to prove your injuries are serious and document them in a way that can help you in court, which a lawyer can help you with.

How Much Is Your Tibial Fracture worth

Your tibial plateau fracture settlement amount will also be higher if you suffer additional conditions due to your injury.

If the fracture is an open one, meaning the skin is broken and any bone is sticking out, you can expect your pain and suffering damages to be higher than the lower averaged.

In general, surgery as well as any deformities and permanent damage such as joint instability will help yield a higher tibial plateau fracture settlement overall.

Another variable that can help increase your tibial plateau fracture compensation is whether or not you suffered damages that can result in long-term damage and complications. Deep vein thrombosis (DVT) and nerve damage and infections can all result in future pain and suffering, for example.

SAMPLE VERDICT (California): $200,000.  A 36 year old was walking in a parking lot when she was struck by a vehicle. The plaintiff was left with serious injuries including a lateral tibial plateau fracture that required surgery. The tibial fracture was a non-displaced one but still required open surgery with hardware implanted that required further surgery to later remove the hardware. The defendant disputed the severity of the injury as well as the need for surgery, but the case resulted in a high payout for pain and suffering and future medical care.

SAMPLE VERDICT (Pennsylvania): $95,000.  An adult female was driving straight on a local road when her car was struck by another vehicle that was making a left turn. Plaintiff suffered multiple injuries leading to chronic pain including a fracture to her tibial plateau bone. Plaintiff argued that her injuries were serious but the defendant argued that the injuries were not sustained and did not warrant a high payout. A jury however sided with the plaintiff and found that she was entitled to $95,000 as well as another $5,000 for her husband for loss of consortium.

SAMPLE VERDICT (California): $1,305,000.  Plaintiff suffered a fracture on her left tibia plateau as well as further injury to the right tibial plateau as well. The fractures in both legs lead to a considerable number of surgeries and long-term medical care. The injury was caused when the plaintiff was on the sidewalk and was hit by a car that went onto the sidewalk and then pinned the plaintiff against a wall causing the breaks in the legs.

SAMPLE VERDICT (Florida): $360,000.  Plaintiff’s car was hit while going through a green light at an intersection. Defendant’s car had run the red light and caused impact severe enough to cause bilateral crush injuries to plaintiff’s legs. The injuries included a displaced tibial plateau fracture that also had a ligament tear. Plaintiff was forced to undergo intensive reconstructive surgery which included an open reduction/ internal fixation to the tibial plateau ultimately leaving the plaintiff with a leg that was shorter then the non-injured leg.

SAMPLE VERDICT (Georgia): $80,000.  A 39 year old plaintiff suffered a fractured tibial plateau when his vehicle collided with another vehicle that was stopped on the highway. The defendant claimed that the plaintiff was partially responsible and shared liability but nonetheless agreed to settle the case for the disclosed amount.

SAMPLE VERDICT (Indiana): $55,000.  Plaintiff was in a Jeep heading south on a local street when her car was run into by the defendants vehicle. Plaintiff was moving through the intersection after waiting at a stop sign when the defendant ran through the sign and collided with her jeep. The impact caused a right knee tibial plateau fracture which required surgery. The injury was severe enough that despite surgery, there was an 8% permanent partial impairment to the leg that was injured.

How can I increase my tibial plateau fracture injury settlement?

You can increase your tibial plateau fracture injury settlement by making sure to take photos of any of your injuries as soon as it happens, making sure to get medical attention as soon as possible and following all doctors orders.

Will a tibial plateau fracture result in permanent damage?

Yes, unfortunately, a tibial plateau fracture can result in permanent damage to your leg including chronic pain, changes in the way you walk, your height and your ability to use your leg.  Early onset of arthritis is also a common result of this injury.

Yes, different kinds of tibial plateau fractures do impact settlement values. A displaced or open fracture will be worth more on average than non-displaced and closed injuries to the tibial plateau.

Are there variables that can reduce my tibial plateau settlement value?

Yes, some variables can reduce your tibial plateau settlement value, such as prior injuries and degenerative bone conditions that may have caused you to have an already weak knee before any injury was sustained.  In terms of prior injuries, there are ways to handle that argument from the insurance company.

What is a tibial plateau open injury?

Los Angeles Lawyers to Help With
Your Tibial Plateau Claims

Insurance companies will do everything they can to show that your tibial plateau injury is not serious and you do not deserve a high settlement.

Our Los Angeles legal team will make sure you get the highest settlement value you are entitled to and work around the clock to fight on your behalf.

Even if you are not in Los Angeles, we can help you, and invite you to call for a FREE consultation.

Call, email, or message us using the contact form below, 24/7, for your free consultation.